Global livestreaming platform Bigo Live's ongoing world tour of its BIGO Giant Dino display recently concluded the second stop of its Southeast Asian leg on 28 August. Held on 27 and 28 August, the 3-meter tall BIGO Giant Dino was on full display at Pattaya's Central Pattaya, Asia's largest beachfront shopping complex. Prior to Pattaya, the BIGO Giant Dino made a stopover at Siam Discovery's Discovery Plaza in Bangkok on 20 and 21 August. The display of BIGO Giant Dino drew hundreds of local Thais and tourists alike to Central Pattaya, where members of the public had the opportunity to take photos with Bigo Live's mascot. As part of the display, the public was also treated to special dance performances by local Thai dance group Real1Track as well as other fun-filled activities. To coincide with BIGO Giant Dino's display, Bigo Live also organised social media and on-site challenges where Bigo Live users and members of the public were encouraged to participate in and win exclusive prizes.

"We are excited to bring BIGO Giant Dino to Thailand, the first stop in Southeast Asia, and are heartened by the turnout and response from the local Thai community. It has been more than three years since the COVID-19 pandemic disrupted our daily lives and social interactions, and it was great to see the community come together to see our giant mascot in person and actively participate in the festivities," Yvonne Feng, Vice President, BIGO said.

"As a pioneer in the livestreaming industry, we are always looking for new and engaging ways to bring entertaining content to our users. As we continue our growth in Thailand, we hope to be the bridge between the virtual and physical worlds, and showcase how livestreaming can complement real-world interactions through our events and initiatives. We look forward to organising similar events here in Thailand and continue to spread positivity and joy to the local communities," Yvonne Feng added.

The global tour of BIGO Giant Dino is a part of Bigo Live's ongoing efforts to diversify its offerings and engage with its users and the wider community. The BIGO Giant Dino made its first appearance in London before arriving in Thailand for its Southeast Asian debut. The mascot will next travel back to Bangkok where it will be on display from 3 to 4 September at ICONSIAM, located along the picturesque banks of the Chao Phraya River.

BIGO Live, a division of BIGO Technology in Singapore, made their debut in March 2016. In 2022, BIGO Live became the fastest-growing live streaming platform where users can share their content in real time through the BIGO Live application. It connects more than 400 million people in 150 different countries, making BIGO the market leader in live streaming applications. 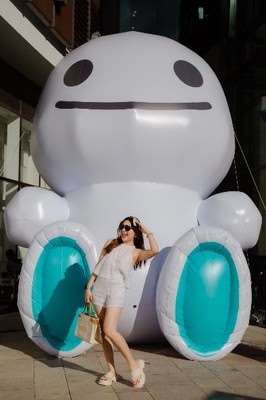